We head off to Midland.  Only should take and hour, took us a little longer and then after some confusion we found Jane Cozens who was waiting for us at a great little Cafe in Midland, Ontario.

Jane was the other Canadian Cousin that became very close to Mum (long distance) in the last few years of Mum’s life.  What a treat for me to be able to meet her and “chew the fat” over lunch.  I ordered a burger and was convinced to have “Poutine”, which I’d never heard of, but was told it is a delicacy in Canada – fries with gravy and cheese curds.  Interested I agreed (even though June said I should wait and have Poutine in Montreal).

The Burger was sensational – better than the American Burgers – it had real cheese, rather than plastic American cheese.  The Poutine wasn’t fabulous.  It was ok, but the gravy was pretty bland, as was the cheese and the “fries” were soggy.  I’m glad I tried it, but I wouldn’t order it again. 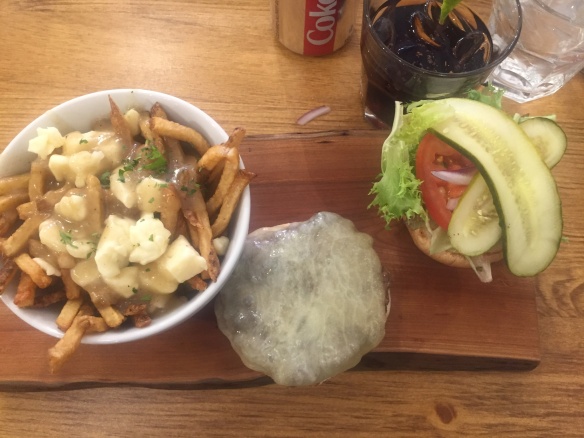 I felt like I had known Jane forever.  I guess we’ve been FB friends for years – Mum introduced us and she set up a private Crout, Cozens and Cousins FB group that we shared family information from time to time with June and Geoff Embleton.  I saw a lot of communication including lots of jokes between Jane and Mum for years.  Then Jane and I have developed our own relationship in the last four years, so I shouldn’t have been surprised.  Conversation flowed easily and I felt like Mum was watching and smiling.  It was a wonderful couple of hours, spent with two of Mum’s most precious people.  What a Joy.