This is a treasure that I found not long after Mum passed away. It was a diary she wrote when she took a cheap, whirlwind trip to Shipley, Yorkshire UK to try to find where her Dad, Harry Scarborough Crout lived before he came to Australia at the age of 16. As this was well before the Internet, and Mum’s blogging, this is almost a travel blog that I decided that I needed to be added to her electronic blog.  This will immortalise her words for everyone to share.  The first thing that struck me in the aftermath of her death from lung cancer was how this diary captured her life as a smoker.  How much her life revolved around it and how much she loved it until she was forced to give up five years or so before she died.  Thank goodness she did and we got at least those extra five years.  The second thing that struck me was how much finding out about her history meant to her and how completely capable and independent she was before she suffered her breakdwn in approximately 1997.  What fantastic timing for her to do this when she would be so emotionally and physically affected in the following years.

These words are those of my Mum’s, writte in pencil, just brought to life by me almost a year after she departed this life.  [Another year has passed now, and I’ve found this draft post, and thought I would post this as part 1 and then continue the story on and incorporate the folder that my Mum made when she got to Shipley for Grandad] 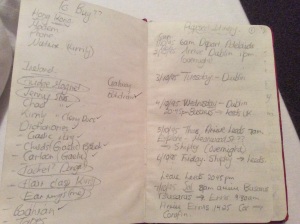 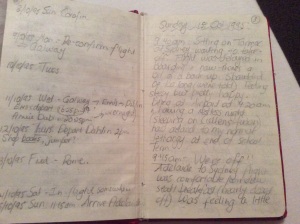 The following two pages are a proposed itinerary

9.40am – Sitting on tarmac at Sydney waiting to take off.  Flight was delayed in boarding and now there’s a bit of a back-up.  Shouldn’t be too long (we were told).  Feeling sleepy, but pretty happy.  Being at airport at 4.20am and having a restless night (sleeping on Cullen’s futon) has added to my normal lethargy at end of school terml.

9.45am – We’re off! Adelaide to Sydney flight was comfortable/window seat/breakfast (nearly dozed off) was feeling a little disgruntled about my seating for Sydey – Hong Kong flight – 76C!!  Right at back of plane.  Glad I didn’t ask for a re-allocation in Sydney and decided to “go with” just what the Universe dished out.  Turns out it is at very back of plane (Qantas 747) but is one of 4 seats that are doubles only (rather than 3) AND the best part is I’ll be able to stretch across two seats (all being well) in my little corner of the plane and get some sleep – after lunch that is.  Non smoking flight is a pain.  I’ll try not to think about it and get some sleep instead.

8.40pm Hong Kong time – Well here I am sitting in “Windows on the World” restaurant in Hong Kong airport.  What a relief!!  Had plate of fries, coke, coffee and am enoying a smoke in the smoking section!! of restaurant.  Most humane!!  The first thing I did on arrival at Hong Kong was to have two smokes – after a smoke free flight from Adelaide to Sydney to Hong Kong!! Took a photo of the “smoking area” sign to remember the occasion.  Had to put my watch back 1 1/2 hours on arrival cos it was getting too confusing and didn’t want to miss my flight to Rome.  So I’ve been here in Hong Kong 3 1/2 hours now (5 hour stop over).  First 2 hours were a pain saved only by endless smoking.  Had to wait in hot humid stuffy arrivals area until Alitalia Transit desk opened at 7 o’clock.  Ended up being 7.20 but my patience was rewarded by getting a smoking seat on the 13 hour trip to Rome.  Although I’ll likely sleep much of the time.  Managed about 4-5 hours sleep Sydney to Hong Kong, so that was pretty jolly good.  Had to use an Australian $50 note to buy my tucker and got change in Hong Kong dollars.  Think I’ll go and buy another carton of smokes with some of it.  Will help reduce my expenses in Ireland.  From memory they’re pretty dear there??  Well flight is due to board in 30 mins (9.20pm).  So need to finish this smoke and get myself into gear.

2.15pm Dublin Airport – Well here I sit in restaurant having cappucino, smokes and about to chuck down some vitamin tablets after what is (at last count) 38 hour travelling.  Don’t quite know whether to laugh or cry.  Cry I think it’ll be, but I can’t afford the luxury right now.  Have to get my head together, energy levels up and plan my next course of action.

Was feeling OK (if a little tired) until I found out that my luggage didn’t arrive with me.  Well, that’s a first!!  Also having some real bad stomach cramps and need to go to toilet.  Woe is me.  Where is my Tour Organiser??  OK the story they told me here at Dublin that they’re not surpirsed my luggage didn’t mak it and they’re amazed I did.  Too many tansfers to check it safely all the way through.  Three is the maximum.  Figured it probably stayed at Rome while I moved on.  This would not surprise me.  Rome was a nightmare and although I was there 4 hours I almost missed my flight due to the fat that when we arrive about 4am there was no staff.  Those that were there were exceedingly rude, arrogant and unhelpful.  Must pause and find a toilet!!!!!

(the nightmare of Rome continued on Page 57)