Thinking… navel gazing… reflecting… call it what you will, I love it!

From the time I was “knee high to a grasshopper” I have always wondered WHY? … asked endless questions and no doubt driven those around me nearly crazy, which is probably why I’d sometimes got infuriating answers like:

As this blog is my legacy to my descendants, I’ve decided to start up “Thoughtful Thursday” posts to share some of the thoughts which have engaged me.  Maybe other readers will enjoy them too and maybe had similar thoughts?

Apologies for being so slow off the mark this week. Be assured that it’s not because I’ve not been having “thoughts” but that maybe my brain has got a bit over- loaded with too much thinking 😀 … NOT REALLY, I’ve just been consumed with heaps of very re-warding family history research.

A haunting issue for me, for the past couple of weeks, has been the matter of “The Magdalene Laundries”.  I first read, in the “Irish Central”, about how Irish girls/women were incarcerated in Convents and became unpaid slaves. Many died there.

Here are just a few of the posts:

Of course it wasn’t just in Ireland that this abuse was being perpetrated but as far as the reaches of the Catholic Church… and that is worldwide.

I think that what horrified me most of all was to discover that “The Pines” convent, here in South Australia, was a Magdalene Laundry. I’d driven past is so often and thought of it as such a beautiful, calm and caring place. The abuse only ended there when the “laundry” was shut down in the mid 1970’s. The last, in Ireland, was closed in 1995… so this is not Ancient History. 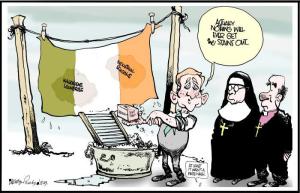 However, be assured that not all my thinking is taken up with issues of social justice, history etc.  I also have an absurd passion for collecting recipes… many of which I never cook.  This one, in particualr, took my fancy this week. French Onion soup with caramalised onions and gooey melted chees… yum yum yum 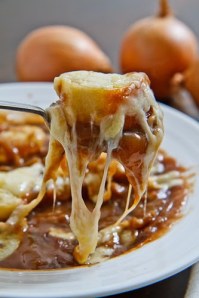 Finally, my Irish heart loves this story about how an Irishman influenced Columbus to take his voyage and discover America.

5 thoughts on “THOUGHTFUL THURSDAY: … of laundries, yummy food and journeys”