Never in my wildest of dreams could I have imagined that I’d find a “hero” in my Ancestry, but there he is John Thomas Crout, on my dad’s side. A heroic and highly regarded Master in the British Navy during the reign of Queen Victoria. Have written already about my “Mysterious Musicians and Mariners” in the Gould “Family History Through the Alphabet Challenge”.  This post focusses on the “derring do on the high seas” of one of these Mariners, John Thomas Crout the Master of the “HMS Pantaloon”, during the capture of the Slave ship “Borboleto” off the coast of Africa in 1845.

On 25 Mar 1807 British “Royal assent was given to a Bill for the total abolition of the British slave trade on and after 1st January 1808″.

Initially the deterrent, for slave-dealing, was little more than a monetary penalty which was totally ineffective. Gradually the punishments were increased and, in 1824, the offence was declared to be “piracy” and punishable by death. However, in 1837, it was changed to “transportation for life” and a

“A squadron of small vessels supposed to be suited for the purpose was forthwith equipped and sent to the African coast, to capture slavers wherever they could be found north of the equator…”

My Great great grandfather’s brother, John Thomas Crout, was the Master of one of these vessels, the “HMS Pantaloon”.

The following is a direct quote from the book, “OUR SAILORS. Gallant Deeds of the British Navy During the Reign of Queen Victoria”, page 149 … with it’s first publication in 1862.

H.M.S. Pantaloon, ten-gun sloop, Commander Wilson had been for two days in chase of a large slave-ship, and succeeded in coming up with her becalmed, about two miles off Lagos, on the 26th May 1845. The cutter and two whale boats were sent under the command of the first lieutenant, Mr. Lewis D.T.Prevost, with the master, Mr. J.T.Crout, and the boatswain, Mr. Pasco, some marines and seamen, amounting to about thirty altogether to make a more intimate acquaintance with the stranger. The pirate gave the boats an intimation of what they were to expect as they neared, by opening on them a heavy fire round of shot, grape, and canister, in spirited a style, that after returning the compliment by a volley of musketry, the boats prepared for hard work. Animated by the show of resistance, each boat now emulated the other in reaching the enemy, the pirate continuing a sharp fire as they steadily advanced, the marines as briskly using their muskets. In half a hour from the discharge of the first gun from the slaver, the boats of the Pantaloon were alongside;  Lieutenant Prevost and Mr. Pasco on the starboard, and Mr. Crout, in the cutter, on the port side. The pirate crew, sheltering themselves as much as possible, nevertheless continued to fire the guns, loading them with all sorts of missiles, bullets, nails, lead, etc.; and, amidst a shower of these, our brave sailors and marines dashed on board. Lieutenant Prevost and his party, in the two boats, were soon on the deck of the prize. The master boarded on the port bow, and, despite the formidable resistance and danger, followed by one of his boat’s crew, actually attempted to enter the port as they were firing the gun from it. He succeeded in getting through, but his seconder was knocked overboard by the discharge. The gallant fellow, however, nothing daunted was in an instant up the side again, taking part with the master, who was engaged in a single encounter with one or two of the slaver’s crew. Having gained the deck after a most determined resistance, they now encountered the pirates hand to hand, when the cutlass and bayonet did the remainder of the work. Lieutenant Prevost finally succeeded in capturing the vessel, but the pirates fought desperately; and it was not until seven of their numver lay dead on the deck, and seven or eight more were severely wounded, that they ran below and yielded. In the encounter, two British seamen were killed; the master, the boatswain, and five others were severely wounded. Lieutenant Prevost received immediate promotion. 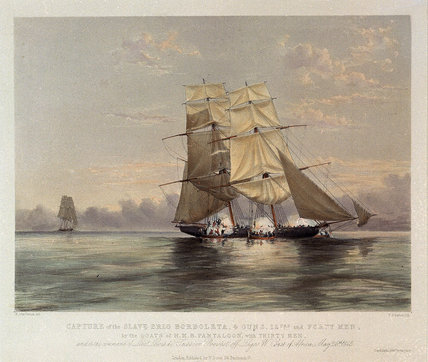 So, there you have it …  I was so very surprised when ongoing research began to reveal all of these mariners/ seamen on my Dad’s side of the family. I learnt that this John Thomas Crout, like his father before him and of the same name, was also a Master in the Royal Navy. It was only because of info from Geoff, who is a direct descendant of Caroline Crout, the sister of both my Great great grandfather, Henry Edward Crout,  and also our heroic John Thomas Crout that this amazing Family History story has come to light and I can share and pass it on. Endless thanks Geoff, from all of us.

RESOURCES:  Cousin Geoff
http://books.google.com.au  capture of a slave ship
http://collections.rmg.co.uk/collections/objects/129022.html  to     purchase a copy of the Painting.