How can one describe the amazement, euphoria and sheer exhilaration in not only finding that missing link in your “family story” but also making the personal connection and with the knowledge that your long lost relatives are as delighted as you are to have found each other ??? …

I’ve posted many stories about my dad, Harry Scarborough Crout, who came to Australia as part of the Dreadnought Scheme at the tender age of 16.  His intention was never to stay in Australia but simply to make lots of money to take back home to his beloved “mam”. Seems that the little boy that my dad was, at that time, really did buy into the myth/ propaganda that Australia’s roads were all but “paved with gold”.

Life’s events over took my father when his mum, Marie (Ogilvie) Crout died way before her time. Dad said that when his “mam” died he never had anything “to go home” for. He was 19 years old, alone and adrift in these strange country of Australia right in the midst of “The Great Depression”.

Family “stories” come and go and I’ve found that some are complete fabrications but, more often than not, there is a grain of truth in every one which simply needs to be teased out… and so it was with my dad’s story of his father as a Clarionet Player in the British Army.

The most recent of my posts, re: dad’s father, was on the Gould “Family History Through the Alphabet Challenge“, titled “Mm is for – Mysterious Musicians and Mariners”.  Since then my email connections have almost gone into melt down and not just because of this blog post.

Long story to short, I now have a photo of my Grandfather, as a very young man, to compare with that of the 1899 photo of the “2nd Dragoon Guards.” Best of all is that the photos just keep flooding in, along with recently discovered “Canadian Cousins” equally excited as I am to share our family stories.

This is the only photo I’ve had, to date, of my paternal grandfather – my mysterious musician, but which “likely lad” is he… and maybe he was “off sick” on that day? 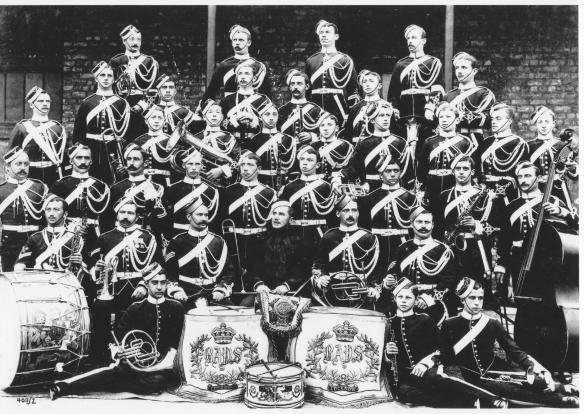 Just perused a photo sent by one of my newly discovered “Canadian Cousins” to try help with the identification. Will put it on-line when June gives her approval

Lots more stories and photos to come, as my newly discovered Canadian Cousins share their memories. How lucky am I, eh? Bursting out with happiness and just had to share.

16 thoughts on “My Canadian Cousins”