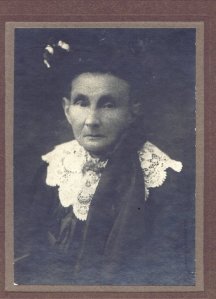 Susan Kelleher, my Great Great Grandmother, emigrated on the ill-fated “Nashwauk” in 1855 with her sister Bridget and has always been my inspiration for researching family history (see here). It’s a joy to have managed to piece together her life from the moment the ship was wrecked off the coast of South Australia, until she was buried in the Broken Hill Cemetery, New South Wales, after a long and productive life.

However, I’ve had no luck at all in locating Susan’s birth family in County Clare, Ireland.  A visit to the   “Clare Heritage Centre” Corofin, Co Clare, in 1994 resulted in the discovery of a family which may be my Ancestors as they had a daughter, Susan Kelleher born 1835. However there is no record of her having a 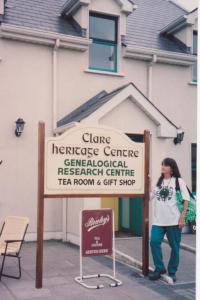 sister named Bridget, but it was pointed out that this does not necessarily mean this couple didn’t have a daughter of this name because,

This couple, who may be my Great Great Great Grandparents, are Hannah and Patrick Kelleher from the Parish of Ennistymon, County Clare. We know from the Ship’s Passenger List that the name of Susan and Bridget’s father is Patrick but there’s no mention of their mother.

Unfortunately, but not surprisingly, the Immigration Papers for all aboard the “Nashwauk” are  missing from the South Australian State Records. I say it’s not surprising because many of these immigrants complained they had no applied, nor had been approved, to come to South Australia.  I’m guessing that some clerk neglected to re-file the papers appropriately.

The Irish “Griffiths Valuation” has been of little help because, although there are a couple of “Patrick Kelleher’s” listed, there is nothing to connect either to my Susan.

Susan was married twice but her mother’s name does not appear on either certificates.  Her death certificate has her mother’s name as the same as hers, “Susan”, but we know that these can often be unreliable as those providing the information are not always fully aware of all details. Susan’s Grandson, with whom she was living, was the informant.

The Clare Heritage Centre confirmed that the name “Susan” may be “Susannah” or shortened to “Hannah” but that’s just a “maybe” and not good enough. 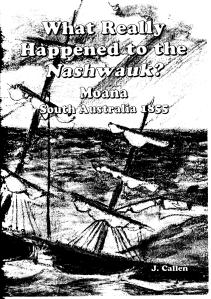 Pauline, from “Family history across the seas”, made a great suggestion, that I follow up on  Susan’s sister, which is something I’d not thought of.  Unfortunately Bridget disappeared from the South Australian records on 13 Jan 1856, after witnessing Susan’s Marriage and there are no “family stories” of her whereabouts.  I suspect she may have travelled on to Sydney, for it’s recorded in the book, “What Really Happened to the Nashwauk?”,  that Bridget was one of the immigrants who complained that she had applied to go to Sydney, New South Wales not Adelaide, South Australia. 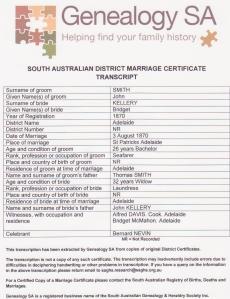 As the South Australian Genealogy & Heraldry Society has just set up an online Index of BD&M’s I decided to give this a go.  All that came up was a marriage for a Bridget Kellery to a Thomas Smith. It was a “longshot” but I did hope that this may be my Bridget with an incorrectly spelt Surname. Finally the Transcript came through and it’s not my Bridget –  Drat! – even if it was there is little information about the Bride.

Well, I have “another iron in the fire” and am waiting… waiting… waiting… for Susan’s Will & Probate Records to arrive.  Maybe she mentions her mother’s name in her last “Will & Testament”?  One can but hope.