The smiles on the faces of the newlyweds beam from the local newspaper, “The Advertiser“, Monday 9 Apr 2012, but it’s the caption which grabs my attention;

The “Habel Homestead” is the birthplace and childhood home of my children’s paternal Grandfather, Waldermar Louis Habel (see here) and I was immediately flipped back to another wedding at this same venue, on the banks of the River Murray, Loxton, South Australia, over 100 years ago.

Grandfather, Wally Habel was just 4 years old when his father, Wilhelm Emil Habel, threw a celebration which was certainly the talk of the town, if not the entire district.  The Loxton Tourism Centre reports;

“Mr Habel marked the occasion of his daughter’s marriage in a manner which caused a great flutter in riverside society as he specially built a pine hall capable of seating 80 people for the wedding.  The steamer, Gem, had 20 of Mr Habel’s guests on board, all the way from Dutton town near Kapunda.  Loxton was the centre of much rejoicing and merry making in celebration of the marriage.”

Our Family History records show that on 7 Feb 1907, Lina (Martha) Habel, third daughter of Wilhelm Emil Habel and his first wife, Marie (Martha) Emilie Fielke, married Arnold Friedrich Stanitzki at St Petri’s Church, Loxton Hut.  It is believed to have been the first wedding in the newly built church. 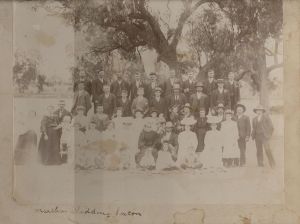 The Evangelical Lutheran Church of Loxton was first organised by E.J.P. Kaesler, in 1897, before the town of Loxton was formally planned.  It began as a “House Church“ with parishioners meeting for worship in various homes. Pastor L.Kuss from the Mannum congregation was sent up river, by the Synod, four to six times a year to minister to the spiritual needs of the people. 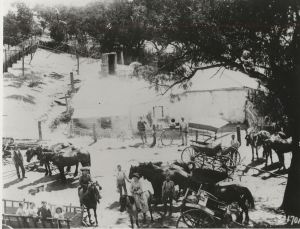 Arriving for Church at Habel Homestead

As early as 1911 the St Petri Congregation began talking about the possibility of building a more spacious church.  The Foundation Stone was finally laid in January 1925 and 14 months later, on Sunday, 7 Mar 1926, some 2000 people came from near and far for the opening of the new church, the size and scale of which was remarkable, showing the vision of the people at that time.

How exciting that my children’s Great Aunt Martha was the first to be married in the original church which, unfortunately, is no longer standing.  Clearly her father was indeed “one of the most successful farmers in the district”  to be able to put on a celebration of this magnitude and it’s wonderful to think that young couples are still “pledging their troth” at the Habel Homestead, Loxton.  However it is unclear as to whether this is the same building for the original homestead, built close to the River and affected by floods, was rebuilt on higher land.

5 thoughts on “Happy Times at the Habel Homestead”