former husband’s Grandfather, and my children’s Great Grandfather, who died on this day, the 17 Feb, in 1971.

Art Anderson was active within the Returned Services League (RSL) serving as Branch President, and in a variety of roles, for very many years. He would never talk of the horrors of Flanders and trench warfare, however he always heaped great praise upon the Salvation Army and the service and comfort they gave to the Australian Forces right up there, with them, on “the front line”.

With his son-in-law, Waldemar Louis Habel, dying so young Grandie was of great support to the young family and willingly took on a fathering role for his daughter Phyl’s three children. He was a  particularly wonderful  role model to the very young and fatherless Steve, who chose to live with his grandparents for quite some time after his mother remarried. 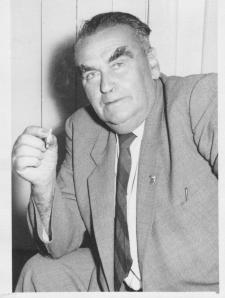 Survived by his wife, son, daughter, seven grandchildren and eighteen great-grand children Arthur Thomas Andrew Anderson will always be loved and remembered as a caring, hardworking man of great character and tenacity – our Grandie.

May he always Rest in Peace.